Era Records are mostly known for releasing soul 45s but they also issued records by garage punk kings The Lyrics, The No-Na-Mees and Ty Wagner. Era records also dipped their toe into the blossoming psychedelic scene and fortunately for us released this cool two sider by the strangely named Chocolate Tunnel.
Google \’chocolate tunnel\’ and you\’ll get hundreds of chocolate cake recipes that will have Willy Wonka slurping like there\’s no tomorrow. But I did manage to find out some relevant information about the band.

According to Gerry Blake from The Avengers who knew Kenny Johnson and Jerry Ritchey, The Chocolate Tunnel hailed from Bakersfield, California and not Los Angeles as stated in Fuzz Acid and Flowers. They only managed this one 45 on Era. Both songs also had a release on the smaller label In-Sound. So I guess enough records were shifted for Era to get interested.

\’Ostrich People\’ is a bass heavy production with what sounds like backwards strings in the mix. I particularly dig the trippy vocals especially the whispered \’ostrich people\’. There is also some menacing fuzz guitar closing the song. I think the lyrics tell the tale of how people avoid confrontation and \’hide their heads in the sand\’ in much the same way as Ostriches are prone to do… it has nothing to do with those weirdo tribes people from Zimbabwe who have two toes on each foot. Try buying cuban heel boots for those things.

\’The Highly Successful Young Rupert White\’ is musically very similar with the same heavy bass and fuzzy guitar. This tune however, has the added attraction of tambourine flourishes and an organ break. Again the vocals are trippy and in parts whispered.

Both songs were written by Kenny Johnson and Jerry Ritchie. Bob Hopps is credited for \’Rupert White\’ only.
Both songs were arranged by Gary Paxton and produced by his Company the Bakersfield International Productions. 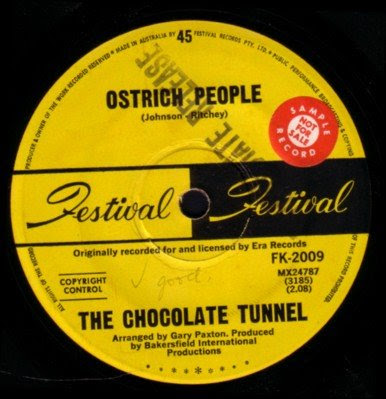 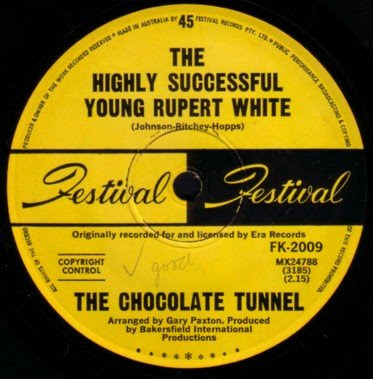 The Chocolate Tunnel also had their one and only record released in Australia on Festival.
Thanks to Tom Price from TOKEN RECORDS in Australia for supplying the label scans.